Officially, the Garden Route starts at Mossel Bay and ends just past Plettenberg Bay en-route to Port Elizabeth. However most people will consider the journey as starting from Cape Town. It’s a fantastic driving route. Travel is on good roads with plenty of towns and service stations to stop for rest and replenishment.

We randomly chose to visit the Simonsig Wine Farm near Stellanbosch on our journey toward Franschhoek. We didn’t bother with the wine tasting but we did taste the wine over lunch. Very nice wine and a fantastic lunch. One of the best fillet steaks we have had world-wide and we have travelled a lot. Nothing fancy just a really really good tender beef full of flavour and perfectly cooked.

Following lunch we had a leisurely drive of under an hour to Franschhoek and the eponymous hotel. We decided we would have quiet night in spoilt a bit by naff room-service food.

Review : Le Franschhoek Originally we were going to spend three nights in Paarl at the Grand Roche. We decided to change and stay in Franschhoek. Because of the late change we could not get our first choice hotel for all three nights. So for the first night we stayed at the Le Franschhoek. We were disappointed. This is a tired hotel much in need of updating. The staff were sort of friendly but not really helpful and I was put off by the parking porter asking for a tip. Charging for wi-fi in-room is also a no-no in my opinion especially when your are paying a good price. It probably had a major remodel in the 80’s with a further refresh about 2010. A lick of paint, new carpets and changing the bathroom taps is not enough. We stayed in room 11 from memory. The bed was one of the most uncomfortable hotel beds I have slept on with a wooden frame and wooden slats for the mattress to lay on. The slats didn’t reach the bottom of the bed so when you sat on the end it collapsed. The bathroom was clean but tatty with a too narrow bath. I said to my wife ‘it’s not too bad apart from the uncomfortable bed and tatty bathroom is it?’ and her reply was ‘well… what’s more important in an hotel than the bed and the bathroom?’ Buffet breakfast nothing cooked to order.  To top it off the checkout time was 10am and they wanted to charge 10 quid for every hour after! For the price: avoid. 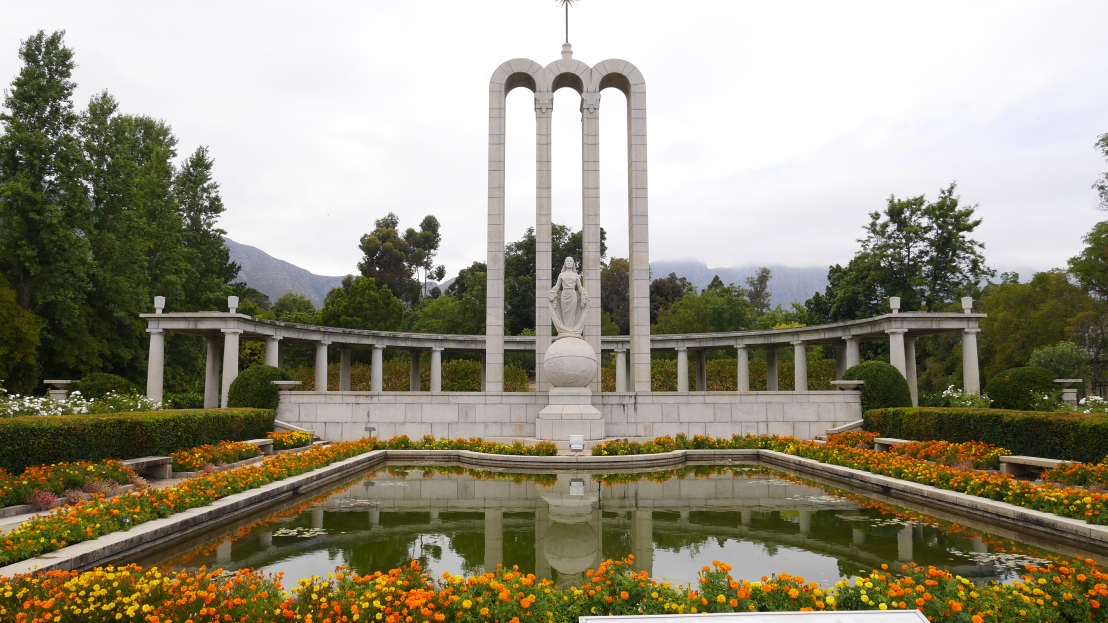 Following breakfast we drove the short distance into town and spent an interesting half an hour visiting Le Huguenot Memorial which is dedicated to the life and works of the Hugenots escaping persecution for 16th century France. Happily, they brought the first vines seen in South Africa’s Western Cape with them. 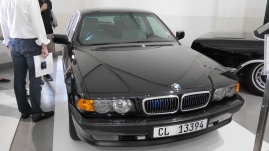 Our discovery of  the Franschhoek Motor Museum was a very pleasant surprise. The museum is well worth a visit and takes about an hour. Notably: Nelson Mandela’s bullet proof 7-Series BMW post leaving Robben Island but pre-presidency.

Had lunch in the high street at The French Connection. Quite good food with a nice vibe.

We checked in at the Last Word, billed as the best place to stay in Franschhoek (By Trip Advisor at least) and we were not disappointed.

Review : The Last Word – A luxurious bed & breakfast tucked away in the high street sporting no more than 8 delightful rooms. We were made very welcome and they could not have been more helpful. Despite an 1pm check-in they made sure we were ok recommended somewhere for a lazy lunch and by the time we got back about 3pm our room (5) was available. And very nice it was too. Large elegantly decorated with a small walled terrace, great bathroom, plenty of storage and a comfy bed! Breakfast was excellent with the best pork sausages I’ve had in a long time but let down by over cooked eggs and a complete inability to make hollandaise sauce. To be fair, it was at least homemade. Thoroughly recommended.

Dinner at the Dutch East Restaurant. We sat outside but the wind was up and so a bit chilly. Food was ok, as was the service.

Had a look round the shops in Franschhoek and a couple of nice art galleries. We then drove back to Stellanbosch, a university town, for a look round. It’s got a large village green with a few artisanal temporary shops around it but little else worth mentioning.

Lunch at Tokara wine farm. In England this would be at least a 2 Michelin star restaurant with a really innovative and delicious local produce menu at incredible prices.

Dinner at the Reubens restaurant in Franschhoek was quite good but if you want really good food have lunch at the vineyards.

To be honest, I think we stayed a day too long, but the vineyards and their lunches did just about compensate for the lack of things to do.

We hummed and hawed about what next to do. Should we drive to Hermanus and climb in to a metal cage and look at the Great White Sharks? Or should we drive down to L’Agulhas the southern-most tip of the African continent? A bit of research showed we needed to stay the night before in order to get the early departing boat out to the shark area. There weren’t any nice hotels available and I was feeling a bit iffy about the whole shark thing anyway. The decision was made when we looked at a YouTube video of some guests climbing in and out of the cage: they all looked so miserable. So L’Agulhas here we come! 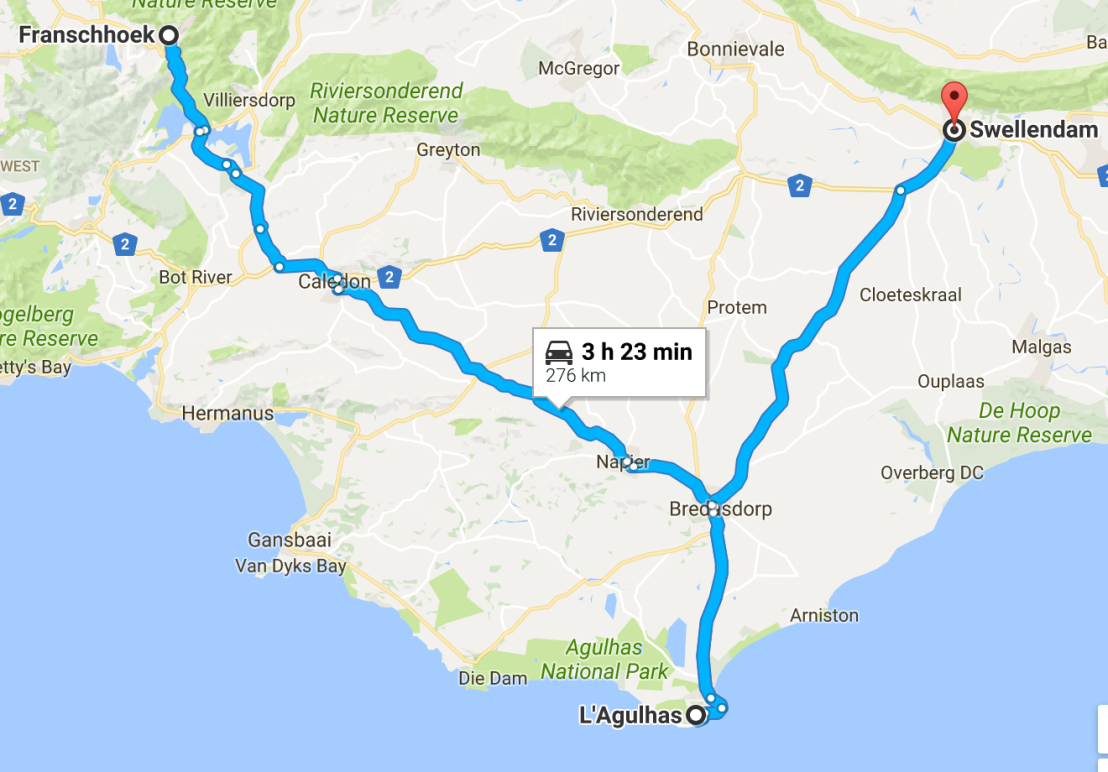 Franschhoek is settled in the hills and to east you have to drive up to the mountain pass – 750m Alt. – followed by a steep twisting drive down to the plains below. It’s beautiful. 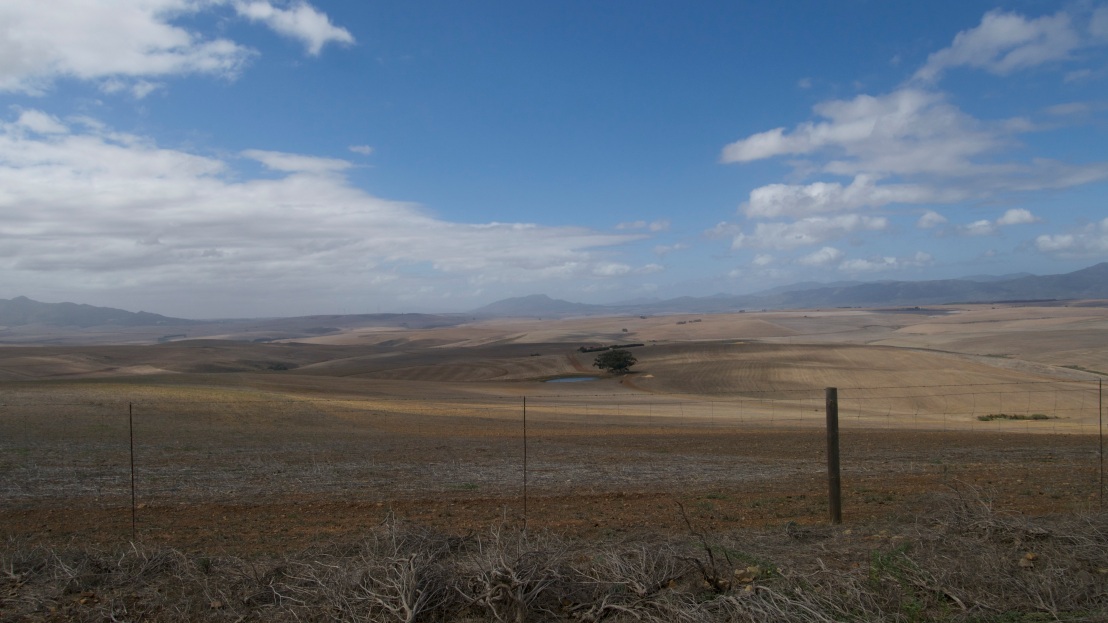 L’Agulhas is a windswept frontier town with two or three half-decent pubs (we had an ok lunch at the Seagulls) but the main event is the rocky headland of the southern most point of the African continent. Approached by a sandy lane through tall grasses the point is a really beautiful spot. We spotted a tortoise walking slowly across the track minding it’s own business too.

There is a nice raised board-walk taking you to the point while protecting the dunes underneath.

Below is the monument that defines the point between the two oceans : The Atlantic and the Indian. So pleased we took the time to visit here. Really special.

If you have a half hour to spare after leaving L’Agulhas take a small detour and drive through the small coastal village of Arniston with it’s quaint dutch-style cottages. 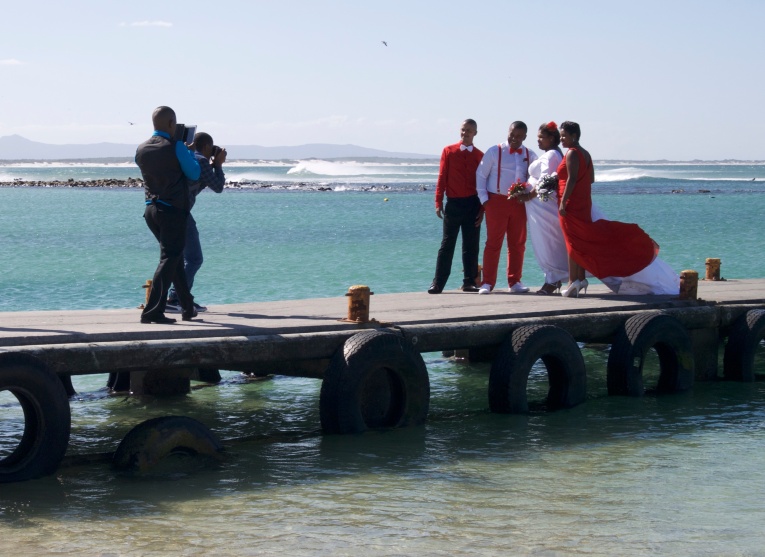 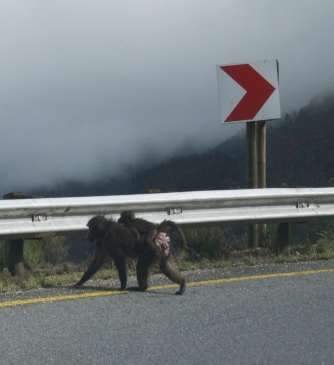 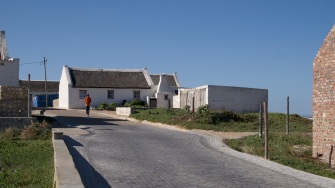 We then retraced our drive and headed on to Swellendam which is a clean and crisp farming town with little to boast about but still strangely nice.

Review : Rothmans Manor. We checked in at the Rothmans Manor B&B tucked away on the main road into town. Owned by a delightful German couple who’s love of gardening and careful attention to detail has produced a calm oasis of rooms overlooking grounds that seem to attract songbirds. I was told that a bit of sugar in the water helped too! They even keep a few Zebra and Kudu. Nice, interesting and clean rooms with comfy beds followed by an excellent breakfast the next day.  It’s a great place to break your journey on the Garden Route. You might be reluctant to leave. 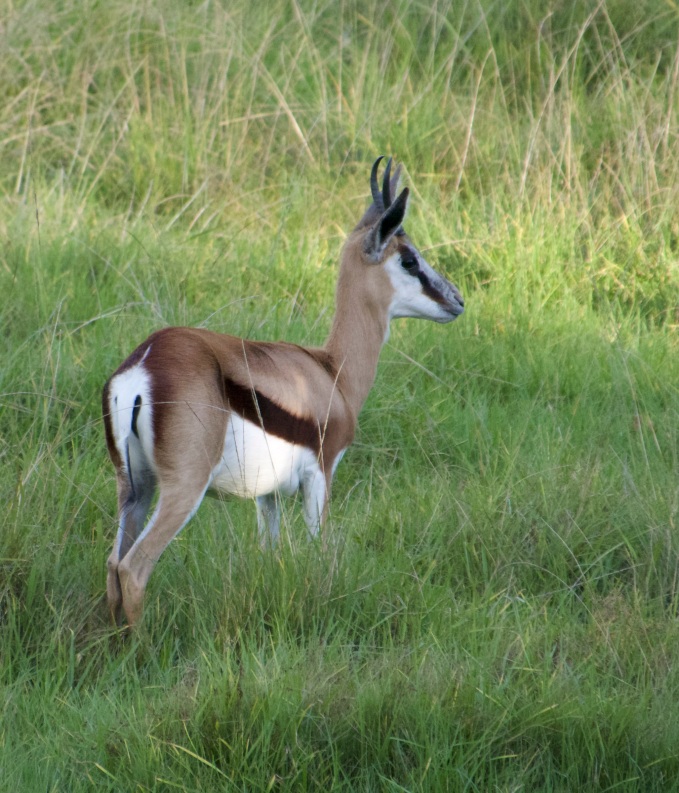 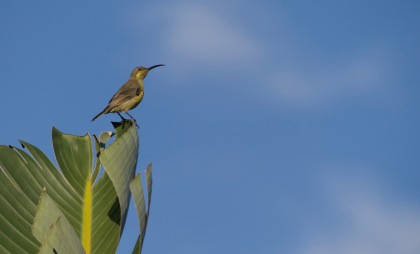 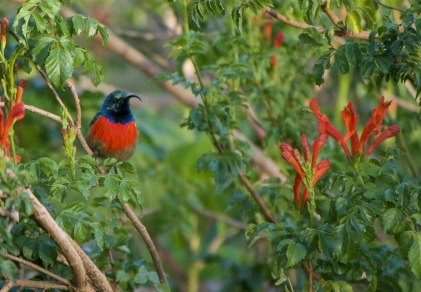 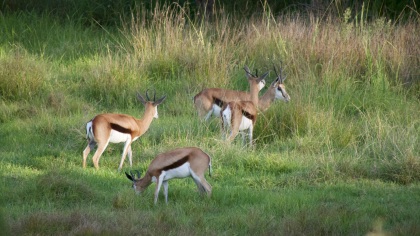 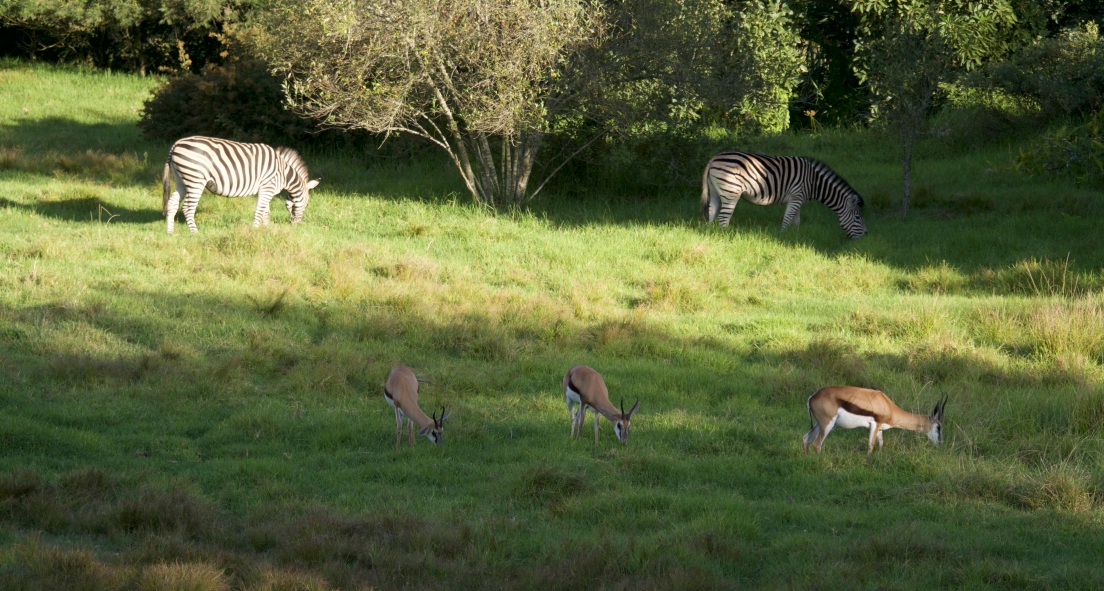 Our journey to Plettenberg Bay continued with the rolling plains that turned to wooded hills as we reached the coast. We stopped for lunch at an average beachside bar at Mossel Bay. Mossel is a budget holidaymakers resort but had its attractions.

As we drove from Mossel Bay (the official start of the Garden Route) we noticed the townships straddling the dual carriageway at some junctions. The inhabitants run across the road without much thought for their personal safety so drive carefully.

2 thoughts on “The Garden Route”